The ZL4USB module is an universal USB <-> RS232 interface that can be used for transmission of data between PC computer with USB and any digital system with USART. Unlike other interfaces the ZL4USB ensures galvanic separation between USB and RS232. 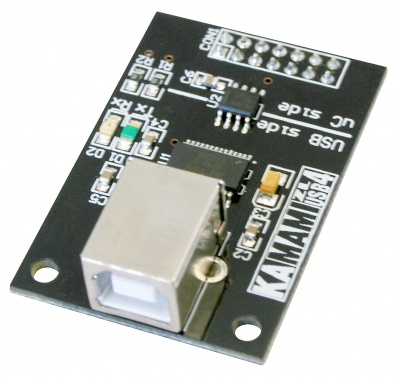 The ZL4USB module is an universal interface which allows to connect any device with UART to computer with USB Host interface. Thanks to using specialized bidirectional separating device USB bus is galvanic isolated from UART interface (Fig. 1). Converter need to be powered from two sources: from USB interface (+5V_USB/GND_USB) and from device connected to isolated TxD and RxD lines. The ZL4PLD is mechanically compatible with ZL1USB.

Function of ZL4USB is shown on block diagram on Fig. 2. From digital system side software is the same as for standard serial transmission. From the side of PC should be used drivers supplied by FTDI company (FT232R device manufacturer). Virtual COM port (VCP) driver is easy to use. With this driver in PC application can be used typical functions for handling serial transmission via RS232 interface. Other way is using direct drivers (D2xx) with the functions included in DLL.

LED module’s features are marked on the module board.

All signals on ZL4USB module connector are described in Tab. 1. Signals arrangement is presented on Fig. 3. Fig. 4 demonstrates how to attach the USB module to a digital system. The line +V_UART and GND_UART (UART side, power lines isolated from the USB) must be connected to supply voltage within the range 3...5V. Galvanic separation between USB and UART will be provided only when the power lines USB and UART are independent. 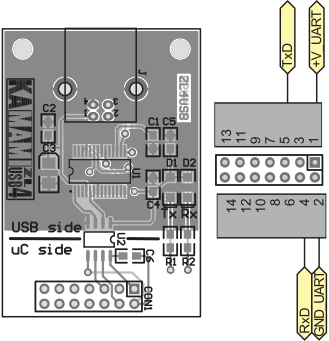